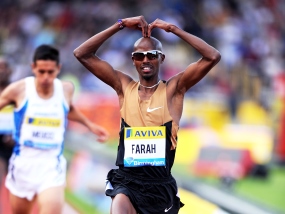 A total of 30 medallists, including 11 reigning Olympic champions, will star at the Sainsbury’s Grand Prix – Birmingham on Sunday 30 June at the Birmingham Alexander Stadium, with four British Olympic medallists from London 2012 headlining the strongest line-up to date since the IAAF Diamond League first came to Birmingham in 2011.

A total of 30 medallists, including 11 reigning Olympic champions, will star at the Sainsbury’s Grand Prix – Birmingham on Sunday 30 June at the Birmingham Alexander Stadium, with four British Olympic medallists from London 2012 headlining the strongest line-up to date since the IAAF Diamond League first came to Birmingham in 2011.

The British charge will be led by double Olympic champion Mo Farah (coach: Alberto Salazar), who will line up in a highly competitive 5,000m race that includes the top two in the world during 2013, Hagos Gebrhiwet and Yenew Alamirew, as well as world 10,000m champion Ibrahim Jeilan.

Farah, who won Olympic gold over 10,000m as part of ‘Super Saturday’, before going on to clinch gold in the 5,000m a week later, is looking forward to returning to Birmingham where he was a dominant winner in the two miles last year.

“2012 was an incredible year for me and I’m really looking forward to competing in front of a home crowd in the UK again. This is another big year with the World Championships just around the corner and it’s always good to perform well in Birmingham.

“I have great memories of competing at the Alexander Stadium and it was great to celebrate my Olympic success with a win there last year. I’ll be looking to run well there again and put on another good show for the fans.”

In one of the biggest rivalries in athletics, two-time Olympic 100m champion Shelly-Ann Fraser-Pryce will take on current world champion Carmelita Jeter as they race over 200m.

Fraser-Pryce, who will also line up against current world number one Blessing Okagbare, is in confident mood as she sets her sights on adding a world sprint title to the three medals she won at last summer’s Olympic Games.

“I’ve started the season well but I know there’s more to come from me. The 200m is looking very competitive already this year but I want to win at the Sainsbury’s Grand Prix - Birmingham and show that I’m still the woman to beat in the sprints going to Moscow.”

“I had such a great welcome from the Birmingham public for the Jamaican team before the Games, I’m really looking forward to putting on a show for the crowd and hopefully come out with a victory this year after finishing second at the meet in 2012.”

World and Olympic 100m hurdles champion Sally Pearson will be joined by the silver and bronze medallists from London 2012 as Dawn Harper-Nelson and Kellie Wells also line up at the Alexander Stadium.

Australian Pearson, who ran an Olympic record 12.35 to win gold in London last summer, equalled the meeting record of 12.48 on her way to victory the last time she competed in Birmingham in 2011 and the 26 year old is hoping for another strong performance on Sunday.

“I’m really looking forward to competing at the Sainsbury’s Grand Prix – Birmingham, I had a great time there in 2011 and hopefully I can repeat my performance this time round. I’ve had an injury problem early in the season but now I feel ready to go out there and run well.”

“Winning the Olympics last year was a dream come true, it was a perfect year for me. However this is another important year with the defence of my world title in Moscow in August and I’m confident that I can run even quicker and get close to the world record of 12.21.”

“We are going to see another world-class field in the UK again for the Sainsbury’s Grand Prix – Birmingham and it’s definitely going to be the event to watch on 30 June. There’s going to be the Olympic one, two and three as well as the World Champion, so it makes for a very competitive race.

“Being the defending IAAF Diamond League champion is something that I want to hold on to this season, and I know I will have to be at my very best in Birmingham right through to the finale in Brussels.”

Sanchez, who took Olympic gold in London eight years on from his triumph in Athens, knows that the Birmingham crowd will play a part in the race.

“We will have the top four athletes from the Games in Birmingham, and I’m sure I will be the one they want to beat. I always get a good reception from the British crowd, but as much as they like me, I’m sure they will be hoping for Dai to cross the line first.”

In the women’s 400m hurdles, the in-form Perri Shakes-Drayton (Chris Zah) will be hoping to secure another PB for the second time in a week. The double European indoor champion, and captain of the GB & NI team at the European Athletics Team Championships, led from the front last weekend winning the 400m with a PB of 50.50, but this weekend Shakes-Drayton will return to her more familiar event of 400m hurdles and all eyes are certainly going to be on her battle with fellow Brit Eilidh Child (Malcolm Arnold), who set a Scottish record in Gateshead last weekend with a PB of 54.42.

Olympic 110m hurdles champion Aries Merritt, who set a stadium record of 12.95 in Birmingham last August, smashed Dayron Robles’ world record with a time of 12.80 in the Brussels Diamond League, and is looking forward to another highly competitive summer.

“I’m really looking forward to competing at the Sainsbury’s Grand Prix - Birmingham and testing myself against another world class field. Other hurdlers are running quick times this year so I’m sure we’ll all push each other and put on a great show for the Birmingham crowd.

“2012 was a breakthrough year for me but now I need to make sure I stay on top. I would love to add a World title to my Olympic one so this is another big summer for me.”

Another event with all three Olympic medallists from London is the men’s shot put; champion Tomasz Majewski of Poland is joined by silver medallist David Storl and bronze medallist Rees Hoffa.


Tickets for the Sainsbury’s Summer Series are available at www.britishathletics.org.uk.

The Sainsbury’s Grand Prix – Birmingham will be shown live on BBC Two from 2pm.