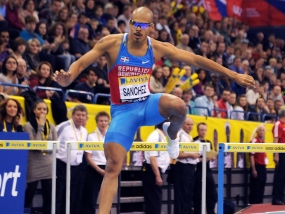 Two more London 2012 Olympic champions have been confirmed to compete at the Sainsbury’s Grand Prix – Birmingham at the Alexander Stadium on Sunday 30 June, taking the total number of Olympic champions set to appear up to eight.

Two more London 2012 Olympic champions have been confirmed to compete at the Sainsbury’s Grand Prix – Birmingham at the Alexander Stadium on Sunday 30 June, taking the total number of Olympic champions set to appear up to eight.

Felix Sanchez, Olympic champion in 2004 and 2012, will line up in the 400m hurdles and World record holder Aries Merritt will compete over 110m hurdles at the prestigious IAAF Diamond League meeting.

Culson said: “We are going to see another world-class field in the UK again for the Sainsbury’s Grand Prix – Birmingham and it’s definitely going to be the event to watch on 30 June. There’s going to be the Olympic one, two and three as well as the World Champion, so it makes for a very competitive race.

“Being the defending IAAF Diamond League champion is something that I want to hold on to this season, and I know I will have to be at my very best in Birmingham right through to the finale in Brussels.”

Sanchez, who took Olympic gold in London eight years on from his triumph in Athens, knows that the Birmingham crowd will play a part in the race.

“I think I surprised quite a few people at the Olympic Games winning gold in the manner I did. However, I have never doubted my ability - whether that was when I was on my 42 race unbeaten run, or lining up on the start line in London as a 34 year old.

“We will have the top four athletes from the Games in Birmingham, and I’m sure I will be the one they want to beat. I always get a good reception from the British crowd, but as much as they like me, I’m sure they will be hoping for Dai to cross the line first.”

Olympic 110m hurdles champion Aries Merritt, who set a stadium record of 12.95 in Birmingham last August - just three hundredths of a second off his winning time in London - smashed Dayron Robles’ world record with a time of 12.80 in the Brussels Diamond League, and is looking forward to another highly competitive summer,

“I’m really looking forward to competing at the Sainsbury’s Grand Prix - Birmingham and testing myself against another world class field. Other hurdlers are running quick times this year so I’m sure we’ll all push each other and put on a great show for the Birmingham crowd.

For tickets and further information about the Sainsbury’s Grand Prix - Birmingham visit www.britishathletics.org.uk