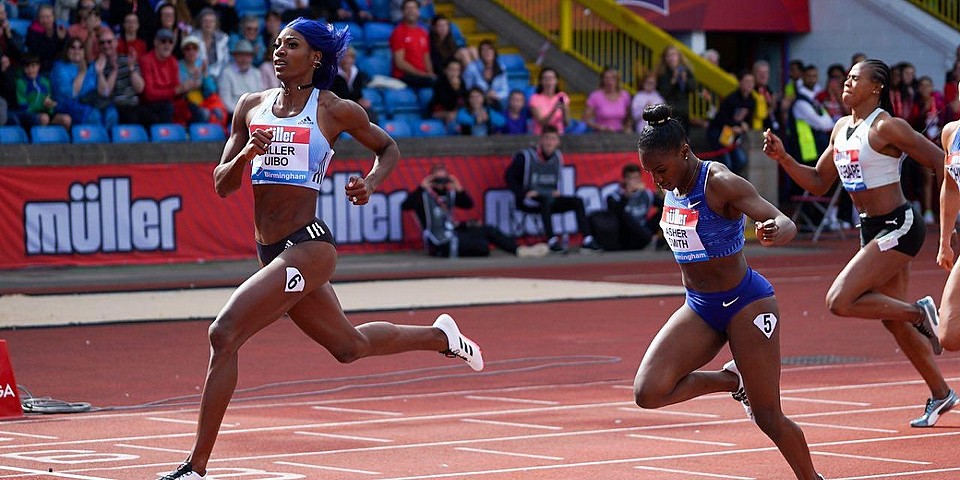 The class of Olympic champions told at Muller Grand Prix Birmingham as Nafissatou Thiam and Shaunae Miller-Uibo stormed to commanding victories weeks away from the World Championships.

A stunning women’s long jump competition saw the Belgian, 24, crunch her PB in the pit twice and break her own national record twice with a leap of 6.78 and then 6.86.

With 6.65 and 6.67 leaps behind her this season, Thiam gave a shuddering reminder of her soaring talent 41 days before the start of the IAAF World Championships in Doha.

“It was really good, a really good competition. All the other jumps were consistent too across the board,” she said.

“It gives me confidence because of the performance I had. Being first or second didn't matter.

“Spanovic was 6.85m - so only one centimetre difference. It was great to be in competition with jumpers and with Kat - we're always really pushing each other.”

The race of the day – and for many, the Diamond League season so far – saw Miller-Uibo hold off a fearsome challenge from Dina Asher-Smith in the next lane with victory in 22.24.

Britain’s golden girl Asher-Smith was out quick and a blistering bend set her up, with double Olympic champion Shelly-Ann Fraser-Pryce, to push the Bahamian on the final straight.

Miller-Uibo kept her composure and her stride length told in the end, a stride ahead of Asher-Smith who finished in 22.36 and Fraser-Pryce in 22.50.

“I made a few mistakes from the get-go but it was fine by the 50-metre mark,” she said.

“The 200m final at the World Championships is going to be an exceptional race with some brilliant athletes, so I’m looking forward to it.”

Asher-Smith added: “I was really happy with how I ran.

“The competitor in me always wants to win, but when you take a step back, that could have been an Olympic final and that would have been a silver, so it’s a good thing!

“I like to mix up the events, I’ve got a 100m next week, 200m the week after. It was good to do it at home, it’s fantastic to be able to run with so many phenomenal athletes at home turf.”

There was a photo finish in the men’s 100m as Yohan Blake dipped past Adam Gemili by eight-thousandths in a race affected by light, but steady, rain.

Sophie Hahn's impeccable record on home soil continued as she took victory in the T35-38 100m, her 12.67 race opening the afternoon with a bang.

The Jamaican banged her knee on one of the hurdles but still managed to seal a third Diamond League race win of the season, 0.11 ahead of Harrison and 0.17 ahead of Nigeria’s Tobi Amusan.

“It wasn't that important to win, this is another race on the way to the Diamond League finals and whether I won or lost, execution was my only focus,” she said.

“Every time I've been racing I've been consistent with my times and that is the main thing for me.”

As anticipated world record holder Beatrice Chepkoech brought a seven-year meeting record crashing down with 9:05.55 in the 3000m steeplechase.

And Germany’s Konstanze Klosterhalfen broke a national record at the Alexander Stadium for the second time, setting a Mile personal best in a race which saw Scot Eilish McColgan finish third.

High wind made for a challenging day in the field, where the experience of Katerina Stefanidi paid dividends as the Greek cleared 4.75 at the final attempt to take victory in the women’s pole vault.