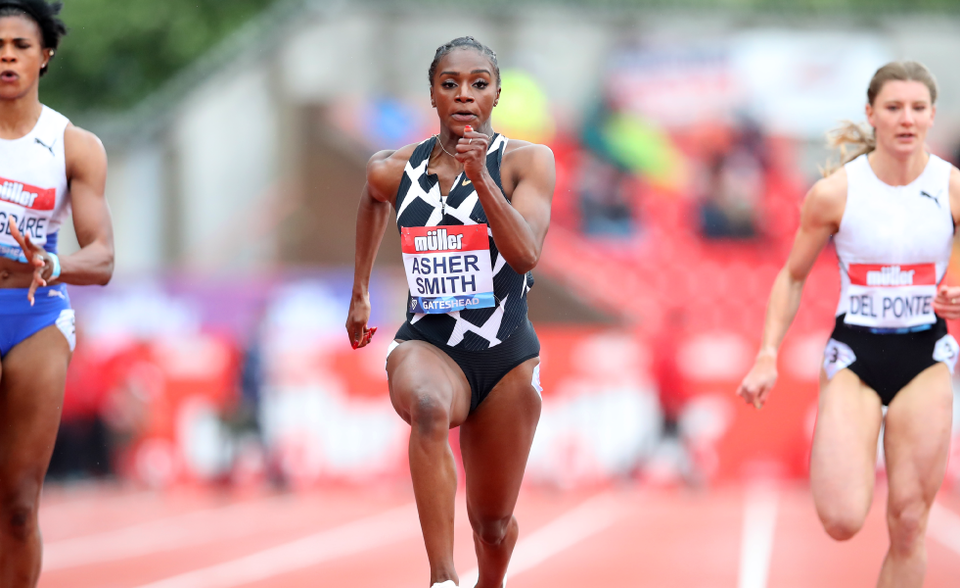 The opening Wanda Diamond League event of the year featured star-studded fields at Gateshead in North East England, but one of them stood out from the rest.

Running in front of her home crowd – which included her parents – and making light of the cold and wet conditions, Asher-Smith triumphed in 11.35 into a stiff headwind of -3.1 m/sec from runner-up Richardson (11.44), world bronze medallist Marie-Josée Talou (11.48) and Fraser-Pryce (11.51). It proved the highlight of this Müller Grand Prix Gateshead and delighted the 2000 spectators.

On the eve of the meeting Asher-Smith had made a point of highlighting how much stronger she had felt thanks to her intensive winter training regime, which included at least 300 abs exercises each day. Indeed, the fruits of her labour were very much in evidence as she looked in complete control on this drizzly Sunday evening.

Afterwards, she even joked that her 300 abs exercises in training was the usual routine on an easy day. On tougher days, she smiled, she would often do nearer 600.

“I was really happy to start my 100m season with a win in what were far from ideal conditions,” smiled Asher-Smith. “When you come to a Diamond League the most important thing to do is to run a good race and keep a cool head. It’s really good practice for staying focused and staying in the moment.

Asher-Smith’s profile will only continue to rise as the Tokyo Olympics edge ever closer and another of Britain’s leading ladies, Laura Muir, also impressed thanks to the manner of her 1500m victory which brought proceedings to a close.

The European champion bided her time but hit the front at the bell and pressed the accelerator, coming home in 4:03.73 and four seconds ahead of Morocco’s Rababe Arafi with Britain’s Katie Snowden third.

The meeting, of course, was originally due to be held in Arafi’s home country in north Africa. But she looked delighted nonetheless with her run and said it was great to simply race after a year of so few competitions.

“Today wasn’t about times, it was about getting out there and getting a win in front of a home crowd,” said Muir, who had enjoyed the cheers of the 2000 fans allowed to attend. “I’m really, really pleased, I just wanted to sit in and use my strength over the last half, which I did. I’ll have to watch the race back but it went really well.”

The men’s 1500m featured another of the meeting’s star attractions in the form of Jakob Ingebrigtsen, who appeared to be enjoying the rain, and the European champion did what was expected of him as he opened his outdoor season with victory in a time of 3:36.27, followed by the Australian duo of Ollie Hoare (3:36.58) and Stewart McSweyn (3:37.72).

Pole vault world record-holder Mondo Duplantis had also been heavily involved in the event build-up but the Swede had to settle for second place as he was only able to clear 5.55m in the treacherous conditions. Victory instead went to American world champion Sam Kendricks thanks to his fifth-round 5.74m, with British record-holder Harry Coppell third following a season’s best of 5.45m.

Cindy Sember was another of the home athletes to enjoy finishing first in front of the Gateshead crowd as she clocked a composed 13.28 into a -3.9 headwind to defeat Hungarian Luka Kozák’s 13.37. Italy’s Luminosa Bogliolo was third in 13.45 while Sember’s sister Tiffany Porter was fourth in 13.50.

It was also tough going for the competitors in the women’s 400m hurdles, a contest which was won by Denmark’s Sara Slott Petersen 56.32 ahead of Briton Jessica Turner’s 56.56 and Jamaican Janieve Russell’s 57.16.

Another of the high-profile home athletes, Adam Gemili, was in racing action for the first time this year and finished sixth in the 200m. The World Championships fourth placer has battled injury problems but declared himself happy to be healthy and competing again as he clocked 21.18. Gemili’s American training partner Kenny Bednarek took victory in 20.33 ahead of Canada’s Aaron Brown (20.79) and André de Grasse (20.85).

American Kendall Ellis clocked 51.86 to win the women’s 400m, with Commonwealth champion Stephenie Ann-McPherson second in 51.96 and Lieke Klaver of the Netherlands third in a season’s best 52.03.

Mohamed Katir’s personal best of 13:08.52 saw the Spaniard win a brilliant 5000m tussle with Nicholas Kimeli, the Kenyan finishing in 13:10.11 as his compatriot Michael Kibet came home almost 10 seconds back. Katir now plans to drop down in distance to the 1500m for the Diamond League in Monaco.

There was also a tight battle in the men’s 3000m steeplechase which was won by Hillary Bor. The American took victory in 8:30.20 ahead of Kenyan Leonard Bett’s 8:31.52 as Frenchman Djilali Bedrani clocked 8:32.04.

Britain’s Emily Borthwick was awarded with the performance of the day by the meeting sponsor Müller as she leapt to a personal best clearance of 1.91m when finishing second in what was an intriguing high jump contest.

Poland’s Kamila Licwinko took first place on countback, while Borthwick went over at the third time of asking and almost managed 1.94m. Her compatriot Morgan Lake was third in 1.88m, the same height managed by fourth-placed Mariya Lasitskene.

Jamaican world silver medallist Shanieka Ricketts won the triple jump after a best of 14.40m, while Portuguese Patricia Mamona managed 14.37m and Naomi Ogbeta of Britain was third with 14.29m – with all their marks achieved in the early rounds before a ‘final three’ shoot-out.

Ricketts described the conditions as brutal and said her main aim was simply to avoid injury. She had travelled to England from Jamaica, where it was around 36C and competes next on May 28 in the notoriously hot Doha.

Auriol Dongmo went furthest with the decisive sixth-round throw in the women’s shot put, having outshone the competition up to that point as the only athlete to go beyond 19 metres with a fourth-round 19.08m. Her final-round 18.16m saw off the closing effort of Jamaican Danniel Thomas-Dodd (18.12m) and American Maggie Ewen (16.96m).

In the men’s long jump Italian Filippo Randazzo saved his best for last with a sixth-round 8.11m which brought victory with it. Spain’s Eusebio Caceres (8.04m) and Jamaican Tajay Gayle (7.91m), completed the top three.

Poland’s Marcin Krukowski won the javelin with his fourth-round effort of 82.61m, which was also a season’s best, as he finished well clear of Trinidad and Tobago’s Keshorn Walcott’s 77.78m. Sweden’s Kim Amb was third in 76.96m.

The evening’s programme had begun with a series of mixed classification para athletics sprints which provided an opportunity for some of Britain’s leading contenders to fine tune their preparations ahead of the upcoming European Championships.